Uncertainty is the name of the game this week. As geopolitical turmoil contributes to a heightened risk of economic downturn, the investment community will be closely monitoring unrest across Asia, Europe and South America.

Emerging markets are in the eye of the storm, and Argentina stole the spotlight within the asset class this week. As mentioned in our weekly market update, ratings agencies downgraded sovereign debt in the aftermath of a shocking presidential primary election. Both S&P and Fitch cut Argentina’s rating to CCC, and economists reiterated a bleak outlook. President Mauricio Macri—the business-friendly incumbent—is unlikely to maintain power after losing the primaries to Alberto Fernandez and his running mate, former President Cristina Fernandez de Kirchner.

Uncertainty surrounding the country’s future has been mounting: after the vote, Argentine equities experienced the second largest single-day drop ever for a global stock market, the ARS declined 15% against the USD and analysts are all but guaranteeing a default in the medium-term. A Citi desk note indicated that, with inflation above 50%, the country will likely need to lean on its reserves.

Pressure related to the country’s $56bn financing agreement with the International Monetary Fund is also adding to woes, as disbursements from the organization will run out next year. The IMF released a statement yesterday announcing that it would soon deploy a delegation to Argentina to meet with the new economic minister, Hernan Lacunza. Former Minister of Economy Nicolas Dujovne, who was credited with negotiating the IMF package, resigned over the weekend. 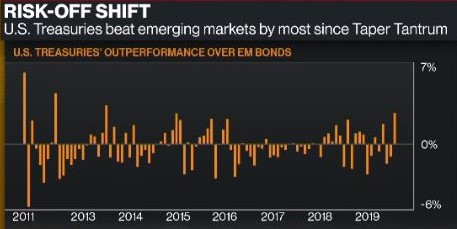 Across the Pacific, ongoing protests in Hong Kong continue to take their political toll. For now, the property market has remained stable amid the unrest—housing prices are actually higher now than when protests began—according to Bloomberg. However, Carrie Lam, the territory’s chief executive, warned that the economic risks could prove worse than the 2003 SARS virus outbreak. The data isn’t “fully reflecting the seriousness of the problem,” Lam said. The airline sector has been one of the most impacted by the rising tensions. Multiple days of shuttered airports took a sledgehammer to Cathay Pacific stocks in early August.

On the mainland, Chinese e-commerce giant Alibaba has decided to postpone its planned $15bn IPO until October given unwavering tensions in Hong Kong. The deal was originally slated for this month, international wires reported.

Elsewhere in Asia, an information blackout in India’s Kashmir Valley has led to reports of a crackdown on civil rights. According to The Economist, the central government has implemented a regional curfew and reportedly detained hundreds of Kashmiri politicians amid plans to split the state into two separate territories. The country’s fixed income traders have indicated that political uncertainty is contributing to a dwindling appetite for Indian paper on the part of the global investment community.

In Europe, the collapse of the Italian government has left investors in “wait and see mode.” Yesterday, Prime Minister Guiseppe Conte tendered his resignation during an extraordinary session of Parliament, after Deputy Prime Minister Matteo Salivini called for a no-confidence vote. As the Wall Street Journal notes, Italy has been trying to find stable financial footing for the past decade, but tensions with EU authorities have hampered the country’s credit flow over the last year.

As the international climate teeters on the brink of crisis, it begs the question of whether the global investment community can surmount what CBXmarket’s in-house expert has dubbed the “totem pole of worry.” Should political risks materialize and geopolitical climate deteriorate, widespread economic downturn could be catalyzed. But for now, we wait and see.