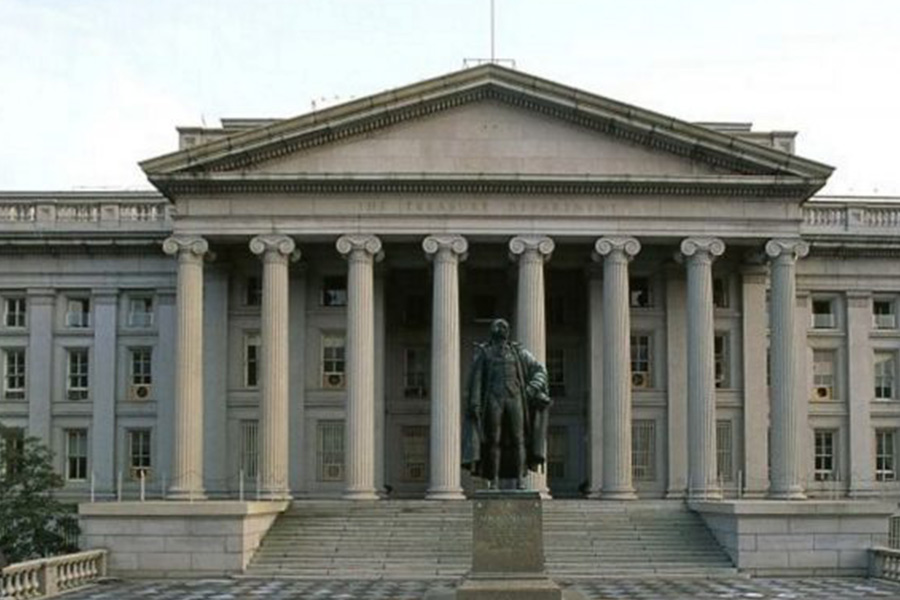 Yellen’s turn. After hearing from Jerome Powell last week, there was a well-timed message from Treasury Secretary Janet Yellen regarding the $1.9trillion stimulus package, who said, “I think the price of doing too little is much higher than the price of doing something big.” Ultimately, she believes the risks to providing too much stimulus are far fewer than providing too little at this point; additionally, the Treasury has capacity to increase funding and the Fed has the tools in place to combat an unwelcome rise in inflation. Yellen met the press as there are continued debates about the size of the stimulus package that is equivalent to saying it is like putting gasoline on a fire that is already lit. Yellen’s argument can be distilled down to the fact that the Biden administration feels the fire is not burning hot enough to warm up everybody who needs it.

Meanwhile, fixed income investors are pricing in these risks to excess stimulus seen through the rise in long-dated U.S. Treasury yields these past few weeks. It is hard to disagree on the need for stimulus given the state of the U.S. job market and major sections of the economy that may be forever changed by this pandemic. These dislocations of resources (jobs and supply) need to be recognized and supported by whatever package is ultimately passed. Yellen stated that “we think it’s very important to have a big package [that] addresses the pain this has caused – 15 million Americans behind on their rent, 24 million adults and 12 million children who don’t have enough to eat, and small businesses failing.” To investors, the size of the package does matter though – as excess dollars have the potential to inflate prices everywhere they go. We have already seen this in some goods and services, commodities, housing market, equity markets, and crypto currencies. Supply is coming and the ability to digest that supply will determine where we go from here in the medium term.

Lots of data crammed into the holiday-shortened week. U.S. core retail sales, which excludes automobiles, showing a significant rebound (+5.9% vs. 1.0% exp.) on the back of late 2020 stimulus checks leading to broad spending in all retail categories – even food and drink establishments. The producer price index, which measures the prices that domestic producers receive for their goods, surged +1.3%, the largest monthly gain since the measure began in December 2009. U.S. PMIs released today continue to paint a picture of the road to recovery as they remained elevated for both manufacturing and services at 58.5 and 58.9, respectively. European PMIs continue to tell the story of divergence between the manufacturing and service sectors; they have been slower to reopen and therefore, manufacturing continues to lead the way (57.7 vs. 54.3) and services lag (44.7 vs. 45.9 exp.). Back in the U.S., the manufacturing sector progress was supported with data from the regional manufacturing surveys out of NY and Philadelphia showing strong trends ahead of economists’ expectations. On the jobs front, weekly initial jobless claims remained elevated above expectations but in line with last week’s release (+861 vs. +765 exp.).

Good for banks’ profitability, bad for fixed income investors who extended duration in search of incremental yields; long-end rates continue to trend higher. Positive vaccine news, expected Treasury supply, and inflationary pressures supported by market and economic data have sent the 10 and 30yr Treasury bonds up roughly +14bps WoW to 1.35% and 2.14% respectively. Given the 2yr note remains locked in around +10bps, that has led to a continued steepening in the 2/10s curve, to above +120bps for the first time since March 2017. The 2/10s curve had remained below 1.0% from May 2017 until it broke through that level this past January.

The bond basis spread tightened this week as credit spreads were flat to down and bond spreads tightened. On the year, CDX.NA.IG is flat. Bond spreads continued their rally and on the year AA-rated bonds are 7 tighter, while BBB spreads are 12bps tighter on the year.

Energy sector tightened the most (7bps) in the IG basket as oil prices rose ~4% from production delays in Texas. Idiosyncratic winners of the week were Exxon, Talen Energy, and Occidental Petroleum. Losers for the week were Macy’s, Pitney Bowers, and Comcast. 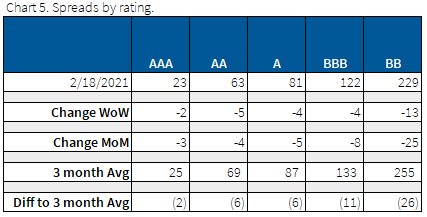 Not a lot of noise from S&P on rating changes, but the notable ~$38bn of debt from Shell Intl Finance B.V. gets downgraded to single A+. The credit was on outlook negative prior to the downgrade.

Municipal bonds sold off this week but still outperformed U.S. Treasuries, which sold off even more. Munis have been trading on their own planet as of late with yields diverging away from Treasury movements as the supply/demand dynamic has been heavily skewed towards lower yields. Now that ratios between munis and Treasury yields have reached these richer levels, this will likely cap the extent of further muni outperformance. 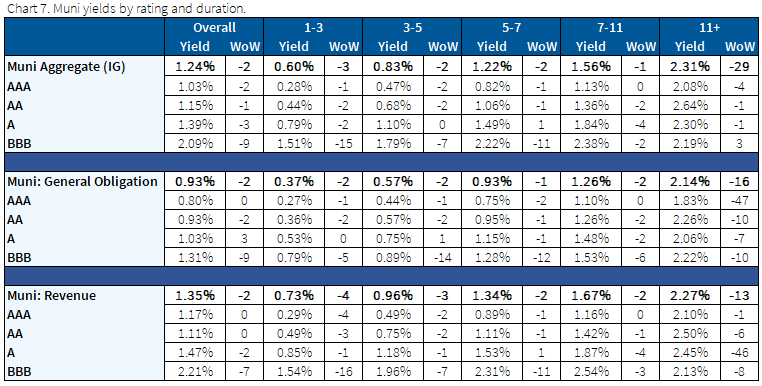 *Disclosure on all charts: Figures shown above are the weighted aggregate of bonds that currently have an IDC price and based off transactions over the past 2 weeks. This may create anomalies in the data but aligns with our effort to reflect actual market conditions. Data pulled as of end of day Thursday, Feb. 18, 2021.