This week saw strong moves in spreads and higher rates as investors see fiscal stimulus on the horizon and less controversy around the election. The U.S. 10yr has finally breached the top end of a 4-month range where rates stayed between 0.50-0.75%. News flow has been dominated by negotiations between Treasury Secretary Mnuchin and Speaker of the House Nancy Pelosi with the understanding that both parties want to pass a deal before the election. Given most investors had lowered their expectations on getting a deal getting done, this uptick has them re-pricing in a higher probability. On the election front, new polls are showing Biden extending his lead further overall and in key battle ground states. This has investors baking in less of a probability of an election where the outcomes are muddled and drawn out. Overall, these improvements in risk sentiment has sent the stock market on a path to be up nearly +4%, one of its best weeks in three months.

Read our blog on the election and how the muni market is impacted for more insight.

We believe the market may be slightly premature in assuming both a broad-based stimulus deal can be achieved in the next 25 days and that polls will be accurate enough to determine the winner in the presidential election. If a stimulus deal is reached, investors will most likely start to worry about U.S. credit fundamentals and debt issuance going forward as the Treasury department needs to satisfy their borrowing needs over the next several years. The fact remains that the U.S. budget deficit has tripled in fiscal year 2020, widening to $3.1 trillion and reaching 15.2% of GDP, the largest since 1945 and will not go unnoticed by bond holders.

Economic data was mixed this week with the highlight coming from the ISM services composite. The key indicator rose +0.9pts to 57.8 in September, led by increases in the new orders, employment, and production components. Even though ISM readings are difficult to interpret at times, especially in the current COVID environment, September's improvement bodes well as a forward predictor and may ultimately show other indicators may be overstating the recent slowdown.

The curve bear steepened this week with the 10yr and 30yr selling off as markets expect some announcement of additional fiscal stimulus. The 10yr auction cleared at 0.765, +6bps higher than the last auction.

Rally in spreads as risk tone improves across the board

The IG Agg traded -10bps tighter on the week, with tightening observed across all sectors. The notable standouts were industrials (-12bps) that led the outperformance and real estate (-7bps) that underperformed all other sectors. The risk-on tone led to a nice move in NA HY (-33bps) and CDX EM (-14bps) spreads as well.

The WoW of spread tightening has brought all sectors through their 3-month average except energy and utilities; communications, industrials, and consumer discretionary were the richest based on that measure. 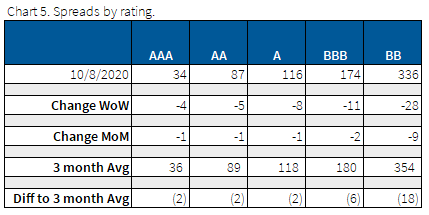 While there were limited downgrades from S&P this week, the notable one was LyondellBasell, one of the largest plastics, chemical, and refining company in the world, which was downgraded to BBB- from BBB. Moody’s was far more active with 12 downgrades to 8 upgrades. The downgrades mainly consisted of speculative-grade companies in the energy sector, but also Simon Property was notched to A3 from A2. Noteworthy on the upgrade side was Morgan Stanley’s upgrade to A2 from A3 on the back of closing the E*Trade acquisition.

Muni yields higher on supply push, while NY and NYC cut by Moody’s

Municipal bonds underperformed Treasuries once again this week as supply continues to inundate the market. Given the uncertainty following the election, municipalities have stepped up their issuance to cover budget gaps stemming from the COVID-induced recession. The demand for munis is still there, but now investors have more choices given the dynamics have flipped from the summer period where they had to take whatever bonds they could source at lower yields.

Moody's cut both NY State and New York City last Thursday. The downgrade was one notch to Aa2, the third-highest investment-grade rating, and warned of an extended period before returning to normal as the region tries to recover from the pandemic. The downgrade reflects the substantial challenges NY and NYC face caused by the exodus of people and overall lower tax receipts. The downgrade is the first time Moody's has cut the NY and NYC ratings in 30 years. The outlook remains negative. 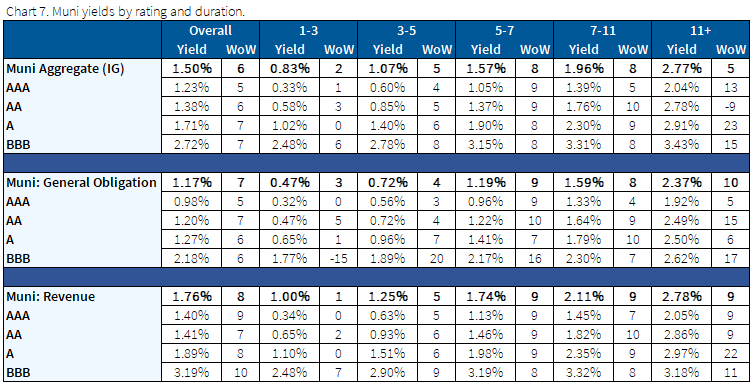 *Disclosure on all charts: Figures shown above are the weighted aggregate of bonds that currently have an IDC price and based off transactions over the past 2 weeks. This will create for anomalies in the data but aligns with our effort to reflect actual market conditions. Data pulled as of end of day Thursday, Oct. 8, 2020.