Peak growth concerns coinciding with the peak inflation reprieve are keeping investors and rates at bay for now, but the upcoming U.S. government spending and a significant uptick in global COVID cases may add a wrinkle to the outcomes of both.

Peak growth concerns coinciding with the peak inflation reprieve are keeping investors and rates at bay for now, but the upcoming U.S. government spending and a significant uptick in global COVID cases may add a wrinkle to the outcomes of both. 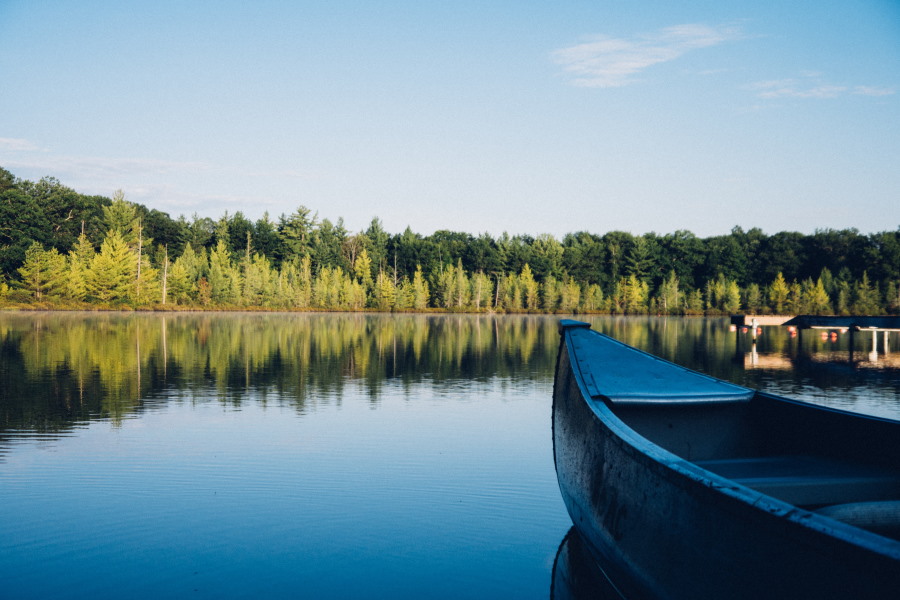 Fixed Income Trivia Time:
What year was the Humphrey-Hawkins law signed, despite it never being fully implemented?

The Humphrey Hawkins testimony this week gave Fed Chairman Powell a chance to defend the FOMC’s prolonged stance of extreme monetary stimulus and, despite being grilled by Senators, their stance has a decent chance of proving out correctly over time. Treasury Secretary Yellen also acknowledged the alarmingly high data points on inflation but maintains that the transitory nature of the items impacting inflation right now (microchips, shipping costs, emergency unemployment benefits, etc.) should normalize over time. The White House on the other hand wants to pump nearly $4 trillion in ‘infrastructure-like’ spending into an already heated economy and the knock-on effects could prove the inflation hawks right in the end. Ultimately, current interest rate levels show that investors are not too concerned.

Economic data this week centered around inflation data with U.S. core CPI for June exceeding expectations with MoM +0.9% uptick vs. +0.4% expected and YoY +4.5% vs. 4.0% expected. U.S. core PPI, which measures price changes from the seller’s perspective, was up +1.0% vs. +0.5% expected MoM and YoY +5.6% vs. 5.1% expected YoY. U.S. core retail sales figures, which have been volatile recently on the back of Federal tax rebate checks, came in better than expected at +1.3% vs. the +0.4% forecast, breaking the trend of the last two down months.

Rates moved higher midweek only to settle lower WoW as the U.S. 10yr peaked around 1.41% only to settle back down to near recent lows of 1.30%. The U.S. held Treasury auctions for the 3yr, 10yr, and 30yr, coming in substantially lower than June prints given the recent move in rates. Conventional 30yr mortgage rates also moved lower this week to 3.09% vs.3.15% last week and were the lowest since the week of February 24th. 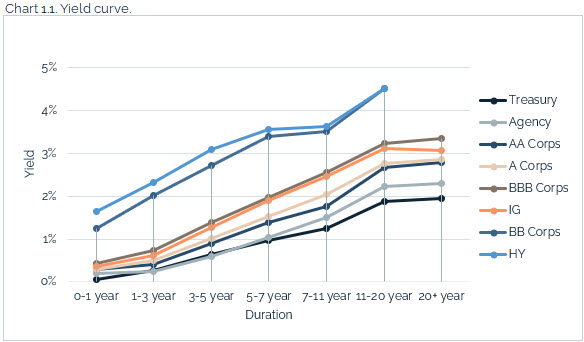 Support for corporates remains intact as interest rates stay low and the economic backdrop remains sound, but the market is starting to pause on risk given the recent uptick in COVID cases. The U.S. High Yield index is hovering around a +275 spread to Treasuries, which is still within recent lows of +262; however, it’s also substantially far from all-time lows of +233 reached in 2007 though that occurred in a very different interest rate environment, which gave many high yield companies significantly cheaper access to financing. 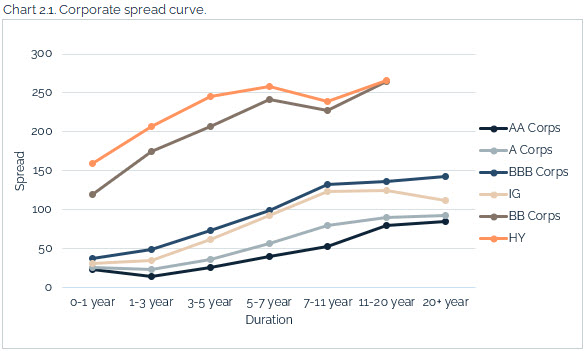 Energy underperformed the broad market as oil prices took a large dip mid-week before closing the week on a high note. 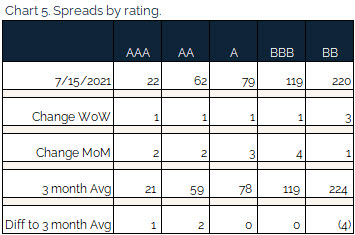 Rite Aid upgraded to B+

S&P upgraded Rite Aid to B+ given a modestly improved outlook with a stable forecast for the pharmacy.

Nothing has changed in terms of the phenomenal back drop munis are experiencing from both a supply and demand dynamic and significant fundamental improvements across the board. Given the expected tax hikes that are expected and the lower Treasury rates, demand for munis intensified this week. On the fundamental front, the State of New Jersey (rated A3) got affirmed with a positive outlook. NJ, like many states, has seen its tax revenue receipts surpass expected forecasts, but they also took aggressive actions around large pension obligations, which will save them additional costs and the potential need for further issuance in the long-run. 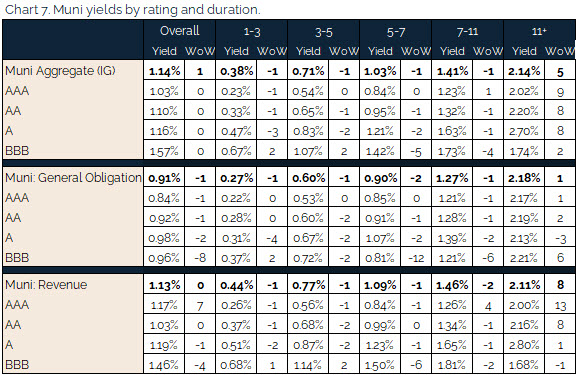 *Disclosure on all charts: Figures shown above are the weighted aggregate of bonds that currently have an IDC price and based off transactions over the past 2 weeks. This may create anomalies in the data but aligns with our effort to reflect actual market conditions. Data pulled as of end of day Thursday, July 15, 2021.

Fixed Income Trivia Time:
Hubert Humphrey and his House colleague Augustus Hawkins created the Full Employment and Balanced Growth Act of 1978, which amended both the Employment Act and the Federal Reserve Act of 1935, however it was never fully implemented. One aspect of the legislation is the Monetary Policy Report to Congress prepared by the Fed on a semi-annual basis.