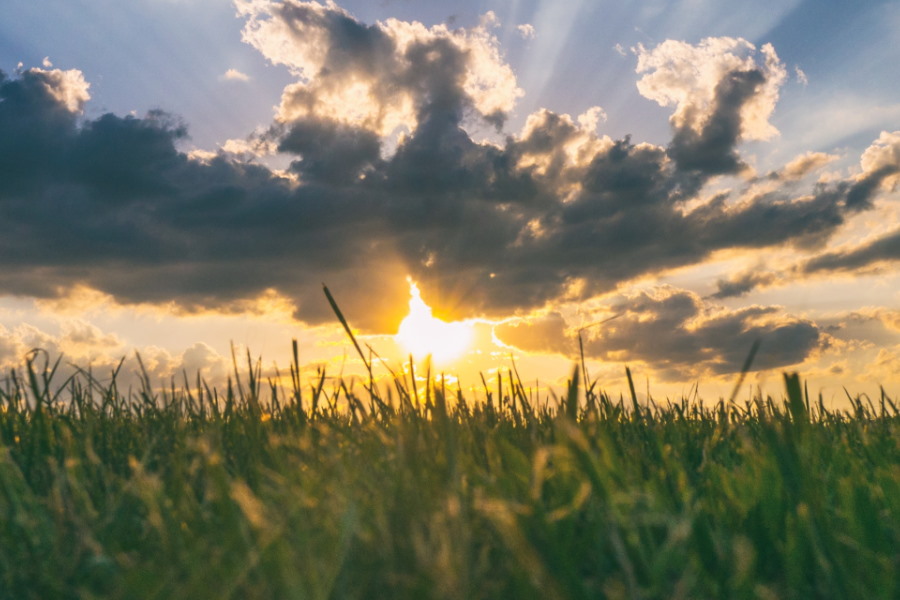 Fixed Income Trivia Time:
What country has defaulted on its debt the most and how many times?

A wild week outside of fixed income markets as Bitcoin took center stage on the back of de-risking sentiment. Bonds were a good place to hide this week even after a small bout of volatility following the Fed minutes that introduced the chance of future discussions to be held in the near term around Fed tapering. Fed Chair Powell promised investors the path to unwind monetary stimulus would be a long and well signed one, but this will not stop the speculation leading up to June’s FOMC meeting and subsequent press conference to be held on June 15-16th. It is also key to remember the most recent Fed minutes release this week did not take in to account the very poor April non-farm payroll figure nor the spike in CPI. Given the balance of forces at play here, this should give the Fed some continued latitude as they continue to emphasize the need to recover the nearly 9 million jobs lost during this pandemic.

In terms of economic data this week, the preliminary IHS Markit U.S. composite PMI set a record high of 68.1. In Europe, the May flash IHS Markit composite climbed to a 39-month high of 56.9 and the U.K. also set a record when its flash PMI index hit 62.0. The figures show Europe emerging alongside the U.S., though with a slight lag given vaccination rollout has had a few hiccups. The weekly initial jobless claims came in at a pandemic low of 444k and are expected to continue lower as GOP state governors have begun removing additional unemployment benefits from individuals, forcing them to return to a job market that is desperately in need for help.

The past week saw the U.S. 10-year yield (1.63%) lower by -1bps WoW, keeping yields towards the middle of the recently established range between 1.50% – 1.70%. The 10-year note did break higher to 1.69% midweek on the back of the Fed minutes, but quickly settled back down towards its near-term average. 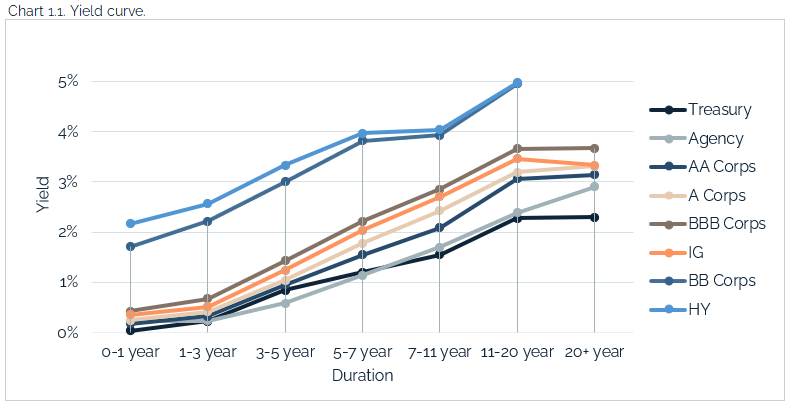 Investors are growing increasingly concerned about inflation and the Fed “falling behind the curve,” but credit spreads have remained neutral; the Agg is 2bps tighter MoM and IG credit spreads are 4bps wider.

Industrials outperformed the broader market with idiosyncratic winners of Caterpillar and International Paper Company. Idiosyncratic losers on the week include Dish DBS, Walt Disney, and Verizon. 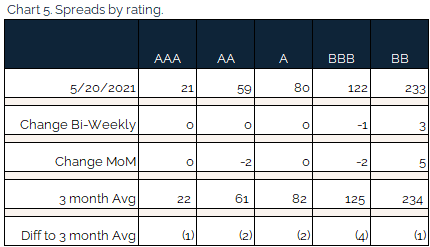 Columbia sees the only upgrade

Columbia sees an upgrade in their senior lien unsecured debt, taking those CUISPs to IG status. Best Buy and Abbott labs have portions of their debt downgraded one notch.

Muni yields moved lower, besting Treasuries WoW. Federal payouts are meant to reach states over the next couple of weeks and will be another lever in job creation and improving economic activity more broadly. Rating agencies have confirmed the obvious that municipalities are on much better footing given this latest Federal support and better than expected tax receipts during the pandemic. The downside is that with higher expected future tax rates supporting the insatiable demand for tax-exempt bonds, it remains a challenge to deploy funds exactly how investors see fit. 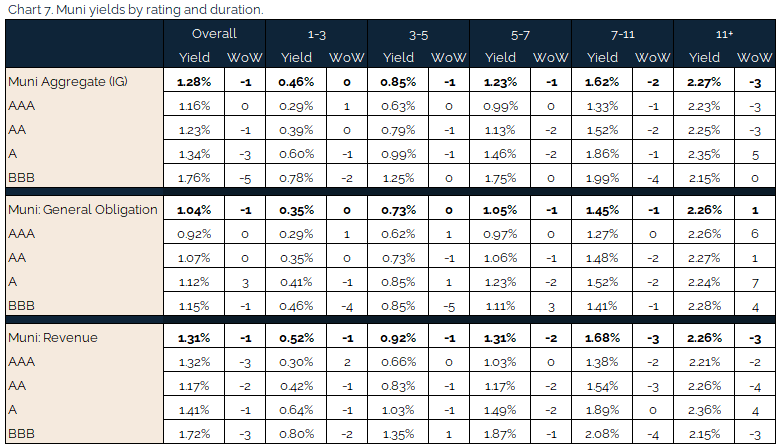 *Disclosure on all charts: Figures shown above are the weighted aggregate of bonds that currently have an IDC price and based off transactions over the past 2 weeks. This may create anomalies in the data but aligns with our effort to reflect actual market conditions. Data pulled as of end of day Thursday, May. 20, 2021.

Fixed Income Trivia Time:
Spain holds the dubious record for defaults having done so 6 times, with the last occurrence in the 1870s.