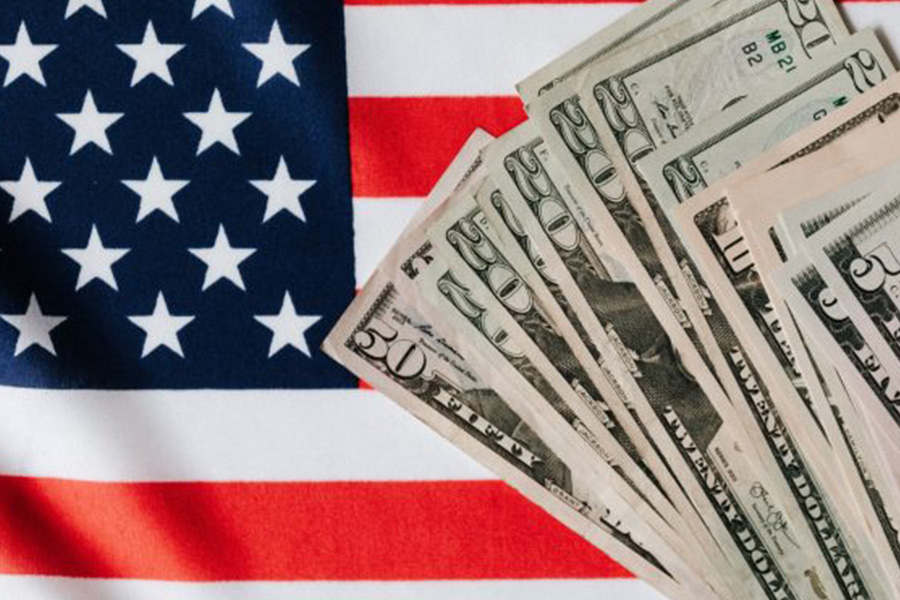 As the pandemic rages on and continues to shutter large swaths of the global economy, investors continue to contemplate the impacts of the Democratic-led majority government. The key is to assess the impact of the larger expected fiscal stimulus versus the potential tax increases on corporations and individuals. Finally, inflation risk is rearing its ugly head as the estimated borrowing from the government will continue to skyrocket. During times of crisis is not usually the time to ask the question how we are going to pay this all back. But market participants have done just this as they look beyond the pandemic to a period of normalcy. This resulted in an interesting week in fixed income markets as longer dated U.S. Treasury yields broke to the upside and established a new range not seen since before the pandemic. On the back of this, cash spread assets tightened and index products sold off as often the more liquid areas react first and cash bonds experience a lag.

The monetary pillar of the economy stood firm this week as bond investors started to contemplate a tapering by the Federal Reserve, but Chairman Jerome Powell squashed that notion completely. Powell reiterated that they need to “be careful not to exit too early.” Powell’s comments came on the back of Atlanta Fed President Raphael Bostic said that he is “hopeful that in fairly short order we can start to recalibrate” the Fed bond buying program. As of the Fed’s latest guidance from its December policy meeting, they are committed to buying at least $120bn a month in U.S. Treasuries and agency mortgage-backed securities. Powell highlighted that this will most certainly continue as he saw the economy “far from our goals,” adding that when “clear evidence” points to progress, Fed policymakers will spell out its plans to financial markets in a very deliberate and gradual manor. Powell concluded, “when the time comes to raise interest rates, we will certainly do that. And that time, by the way, is no time soon,”… mic drop.

Weekly initial jobless claims saw a significant uptick this week (965k vs. 795k exp.) marking the highest point since late August when claims were still north of a million workers each week. December’s CPI MoM was up +0.4% and in-line with expectation but a marked uptick from November’s +0.2% given the December rise in oil and commodity prices, roughly +9% and +6% respectively. The more favored Core CPI measure for December which excludes food and energy came in with a slight MoM uptick of +0.2% and flat on a YoY basis (+1.6%) vs. expectations and the November print.

The U.S. 10-yr note reached an intraday high of 1.18% mid-week but settled back down to roughly 1.11% as the market risk appetite faded and economic data disappointed. The 10-yr auction this week printed at 1.164%, more than +20bps higher than December’s auction and the highest yield since last February’s auction that yielded 1.622%. The 2/10s spread breached the +100bps threshold earlier this week but settled back below the key level, ending at +97bps.

Credit spreads and credit index spreads tighter on the week

Spreads tightened across the board in both CDX and Credit. Energy outperformed all other sectors, driven by an increase in prices and expectations for greater demand. At writing, oil is edging lower due to coronavirus concerns, so expect volatility in credit spreads.

Idiosyncratic winners of the week were Merck, JPM, Toyota, and Apple. Losers for the week were Carnival Corp, American Airlines, and Staples Inc. 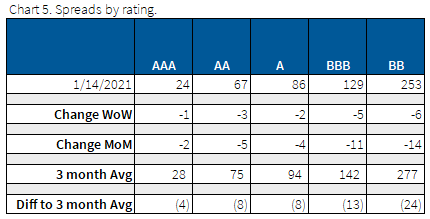 S&P with all upgrades for the week

This week saw no notable ratings actions. Both S&P and Moody’s have lowered their 12-month HY default rate, but it is still significantly elevated from last year (8.4% vs. 4.3%).

Yields were higher in munis WoW as longer dated bonds sold off. The Democrats will officially take over next week and expectations are that the next COVID relief bill is estimated to be ~$1.9tr and will include broad support for states and local governments. Moody’s indicated last week that the shortfall amount facing state and local government issuers is around ~$80-$100bn through mid-2022. 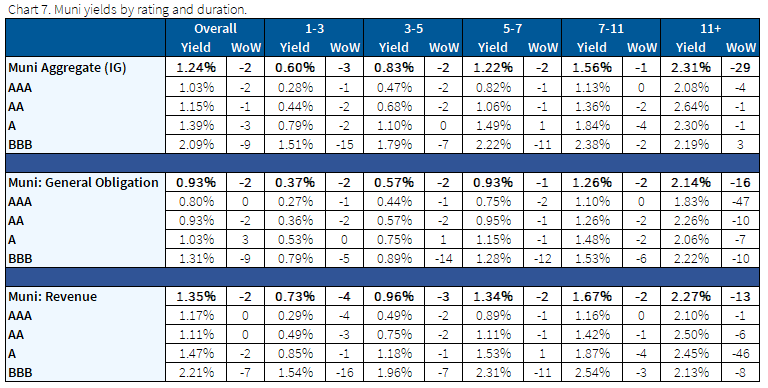 *Disclosure on all charts: Figures shown above are the weighted aggregate of bonds that currently have an IDC price and based off transactions over the past 2 weeks. This may create anomalies in the data but aligns with our effort to reflect actual market conditions. Data pulled as of end of day Thursday, Jan. 14, 2021.